Since the weather has improved,  I have been itching to get some Mustang work done -- actually, the nice weather inspires be to go for a ride in my 65 Mustang but it needs a little work before I can drive it.

I stopped by Quality Rental in Carmel on the way home from work and picked up the hoist and got to work upon arriving home.
The first order of business was to cut the hole for the RJM Injection Tech EFI harness while the engine was out of the way.   This needs to be an oval hole 1.5" x 3" to fit the rubber grommet supplied by RJM.  It was simple to do by marking the 2 center points 1.5" apart, drilling, then trimming the triangular
pieces to complete the oval.   I chose the location so that the harness would be less prominent based on what Brad suggested.
EDIT: The hole actually cannot be in the middle.  My harness from RJM Injection is well wrapped and branches off to either side of the intake in precise locations.  I could probably re-wrap the harness but they did a nice job wrapping and it would be easier to redo the hole where the instructions say.
Next, I installed the used bell housing to my new Tremmec super heavy-duty T-5. Here are the specs for this tranny:

I hooked up the hoist and engine tilter to the engine and removed it from the stand.
After that, I bolted on the new pressure plate and clutch disc.  Nothing special here, just the basic stock replacement parts.  The stock t-5 and clutch survived more than 10 years in my 93 Fox Mustang -- and that was supercharged and dyno'ed at 320 horses at the wheels. I also raced it quite often and only the part I had to replace was the thow-out bearing after 103000 miles. 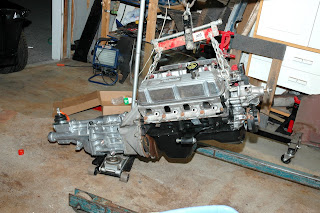 With the clutch ready to go, I tilted the engine to line up with the tranny and bolted together.   Tip: using the clutch alignment tool to get an idea of the rotation of the clutch disc splines and rotate the transmission's input shaft's splines to match. Everything slips together with very little effort.   Also, apply some anti-seize lube to the engine's bell alignment pins.  I found that this helps installation and, years later, removal.
I highly recommend using an engine tilter especially when the tranny is attached.  I've installed engines lots of times in the past without one and it was a real pain having to unbolt and reposition the chain to the right angle.  Using the tilter to get the right angle is just a matter of buzzing it with the impact gun.

The engine basically just dropped right in and with the engine mounts supplied by Total Cost Involved, it was a snap to line up.  The extra space left after removal of the shock towers helped a lot too.   I could almost stand in the engine bay with the engine if needed. I should be able to bolt in pretty much any exhaust header without clearance issues. 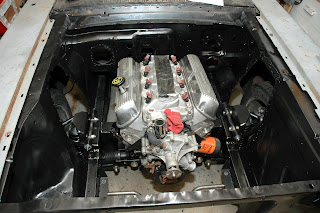