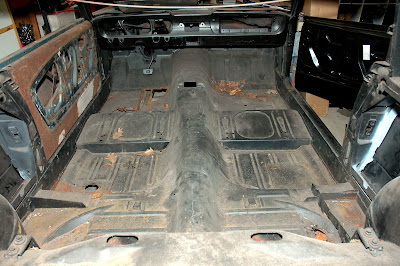 The floors were not as bad as some I've heard about. There were large patches over older patches. Most of the other areas were pitted and had pin holes.  There was also some evidence of possible accident repairs. 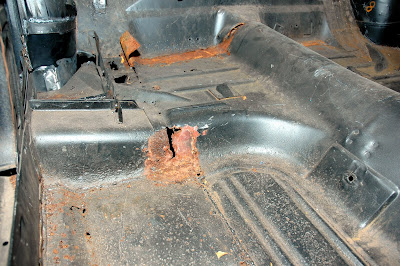 I started with the rear passenger seat area.  It seemed to have the most rust damage.  It probably would have been a good idea to replace the whole right side floor pan but I went with a 2 piece set up. 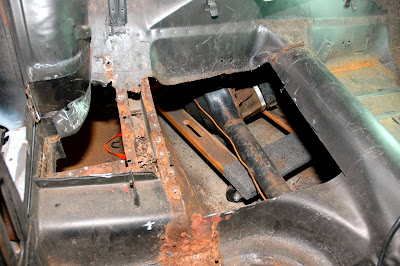 With the rotted floor out of the way, I can clean up the frame rail and torque box areas.  They were in pretty good shape. 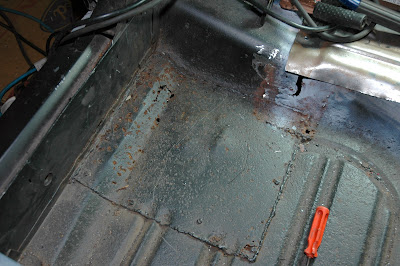 Moving on to the passenger's feet floor area, I encountered an old rusted out patch, held in with screws and few tack welds. There is supposed to be a drain plug there somewhere. 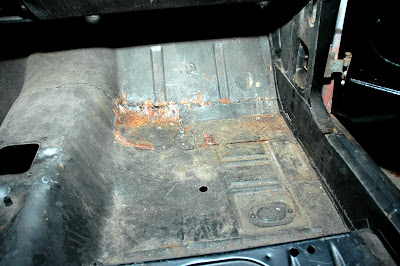 The front passenger floor wasn't much better.  To replace the whole passenger side floor, I have to remove the seat riser first since I will be reusing it.  Underneath that there was even worse rust. 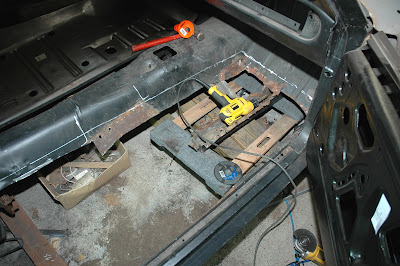 I roughly cut out the floor in a few small pieces and laid in the new pan to mark the edges.  I will be butt welding the new pan in place.  Since the floor pan is so large, I decided to leave some extra metal behind.  The pan wouldn't lay down in on the frame rails enough to make precise cuts for butt welding. 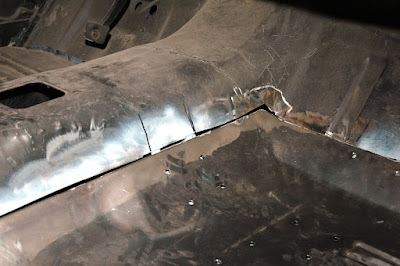 With a little persuasion and coaxing, the new steel will fit nicely. 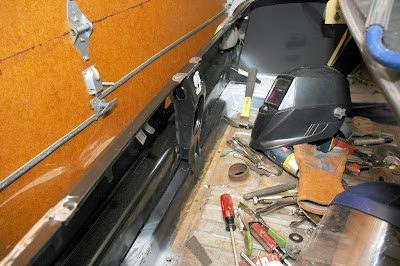 With the quarter panels in place, I can now button up the rest of the back end metal.  These are the remaining welds for the trunk dropoffs and tail light panel.
I installed the trunk lid to make sure everything still lined up before welding. 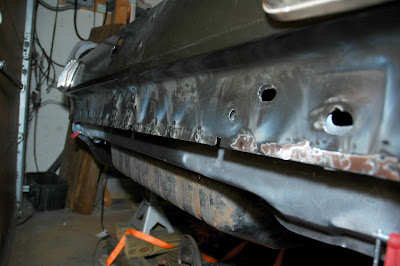 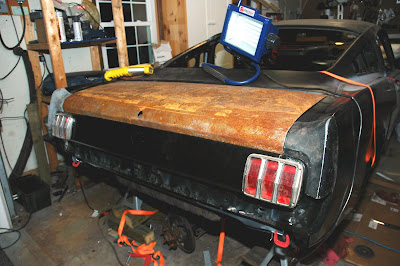 Everything still lines up and its starting to look like a car again.
Posted by Barrett at 10:45 AM 4 comments: 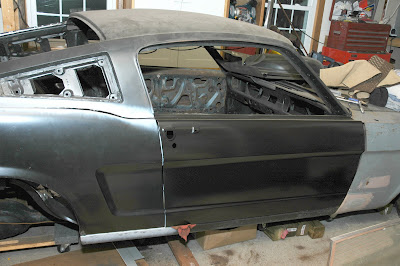 Passenger door alignment still looks good. The door bumpers and seals are not on so I wedged a rag in to take up the space.  The old hinges were letting the door sag too much. 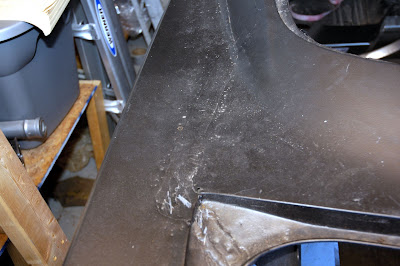 Looking at the drivers side quarter, I can see that it was replaced some time in the past. It has to go too. Its really beat up. 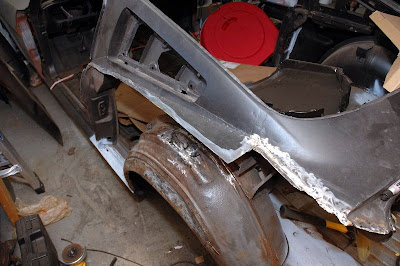 With the quarter panel out of the way, I could make the repairs to the wheel house.  After the old metal was removed, it was clear that the quarter was replaced at least twice in the past.  There were some really ugly scars in the area. 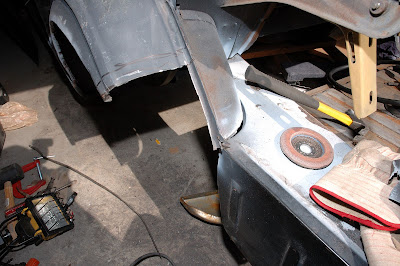 I removed some the old pitted metal so I could install the new lower wheel well patch. 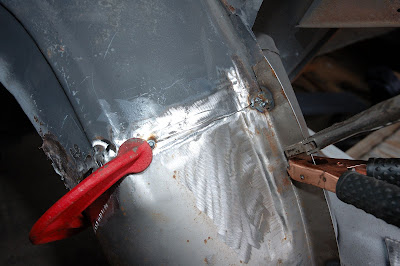 Tacked in and ready to weld. 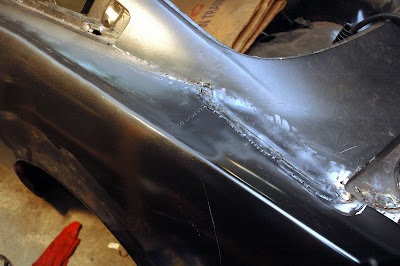 The new quarter panel lined up nicely and was welded in.  The metal around the side vents was pretty distorted from multiple quarter repairs so I decided to replace it.  I would have much rather replaced the quarter and vent as one piece but it didn't work out that way. 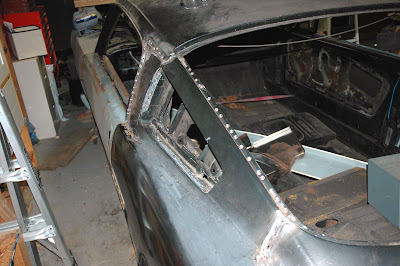 The lead was melted away and factory spot weld were drilled out in preparation to remove the vent opening metal. It was obvious to me that this was not going to be easy. 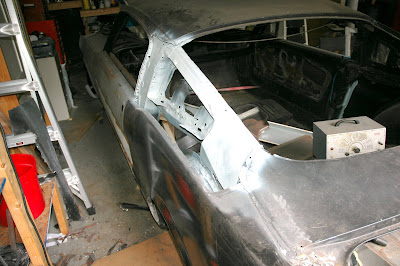 Cleaned up and primed. Ready to go. 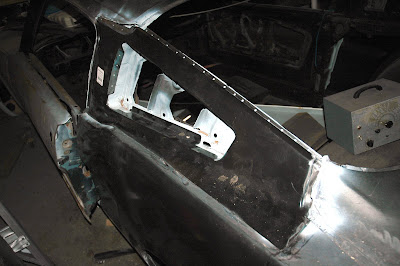 Lined up well and ready to plug weld in place. 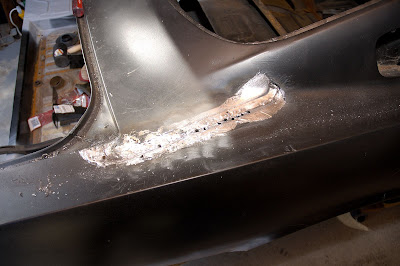 The quarter panels had a lot of dings, cut outs, and old attempted repairs.  I had initially thought that I could use patch panels to fix them but I didn't like the idea of filling the joints and the patch panels didn't look right. I opted to replace the quarters with new repro metal.  I would get a nice new surface too instead of the old nasty pitted one -- less body work.
I started by melting the body lead with a torch. You should do this with plenty of ventilation and eye protection. Drilling holes in the bad quarter helped drain the liquid metal and break the factory tack welds. 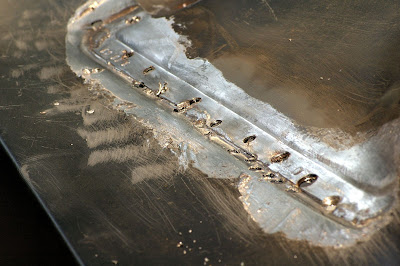 While the metal was still hot, I wiped the excess lead off with a damp rag.  Then using a reciprocating saw to cut away the majority of the metal, leaving just small strips around the areas of the factory spot welds of the door jamb/pillar and wheel wells.  Its easier to pry off the small metal strips without disturbing the good metal that remains behind. 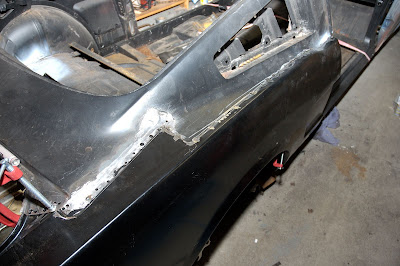 After some cleanup and priming, I set the new quarter panel in place and clamped it to the old metal.  Its really important to install the door to check alignment before welding the new metal. I did an alignment check before cutting out the old metal as well.  The trunk lid and tail light panel should also be lined up, if not already installed. 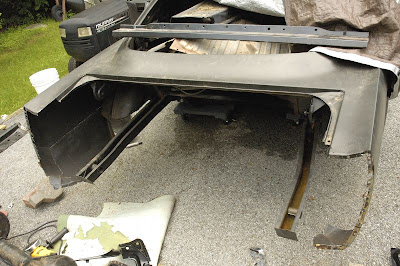 Its not a pretty sight.  I removed the tail light panel and mounts since they were damaged. The rest of the work was already done by a previous owner. 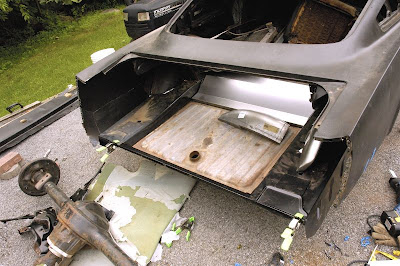 I installed the trunk floors, gas tank, and frame rail to check alignment.
If at all possible, I would recommend having the leaf springs in place for welding since it will help with frame rail spacing and centering.  To make sure the springs end up spaced right, you may want the rear end installed too. 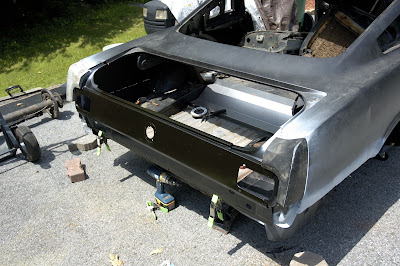 Its really important to dry fit everything before welding to make sure the new stuff is in the right place because it may not line up with the old parts. Some repro parts aren't perfect and will need tweaking. With these new parts in place, I welded the floor to the frame rails and the old floor.  Its beginning to resemble a Mustang again. 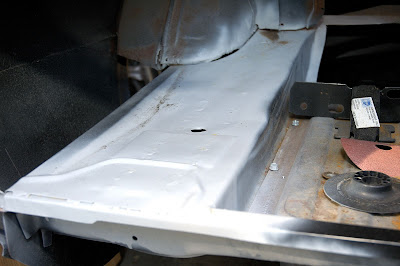 I drilled holes for plug welds to line up with the rear frame rails and welded away. Later I primed the smoothed welds.

Posted by Barrett at 8:56 AM No comments: