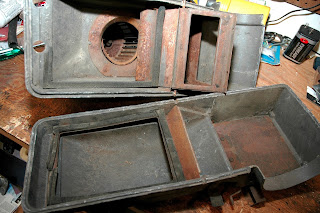 I found a few minutes to get some work
done so I thought I'd do a quick write up on the old heater box.  This was a pretty simple rebuild.

The heater box is fiberglass shell held together with small metal spring clips.  You have to be really careful prying these clips off since the fiberglass is dried out and brittle.

Once the shell is open, you can remove the heater core and spacer bracket. Mine was already open and the heater core was gone.  Just a few crumbs and black dust were the only the evidence of the seals that were once there.

First step was to clean out the shells and remove and remaining seals.  There are two screws on the outside of the that hold the heat diverter box.

Once they are removed, you can remove the diverter and clean it.  It helps to take a few pictures if you need help getting it back together later.
The metal parts were pretty rusty so I wire brushed and sanded them (a media blaster would be nice right about now).

After a little primer and paint it was ready to go.

Next is reassembly.  I picked up a can of general purpose spray adhesive from the auto parts store.  It looks like rubber cement and seems to hold pretty well.

I found that the best way to stick the new foam on was to first dry fit the pieces and know where each one goes before spraying.  The triangles that go on top and bottom of the diverter had to be punched out first to make clearance for the crank arm. 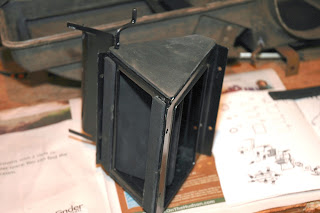 Then I sprayed the foam pieces one at a time, letting the adhesive tack up for a minute before pressing into place. I just hope this glue holds well with all the heat that blows through there.
There are pre-cut foam squares and strips for the all the doors and the diverter box.  The instructions that came with the CJ Pony Parts heater rebuild kit had diagrams that were a little small but usable.

The pieces that go inside the diverter box can be tricky to line up when covered with adhesive so it helps to figure out how it lines up before spraying.
To aid in lining up the strip that the diverter screws go through I ran the screws into the pre-drilled holes in the foam and sprayed the foam. Then used the screws align to the holes in the case. Once the glue was holding, it removed the screws.

Then I laid in the diverter box.  This requires that you spread the case open a little as you press it into place. Its a little scary to do as it sounds like the case is about to split.  Fasten the diverter back in with the two little screws. 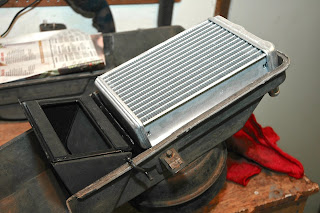 Next, I sprayed glue on one of the heater core seals and stuck it to the case - have to line this up carefully so that it seals against the core. Then carefully laid the core over the seal and making sure the tubes are centered in the holes.

The last thing was to close up the case, carefully lining up the edges. On mine, this was a little tough as the new seals made it hard to squeeze the halves together. I tried slowly clamping using vise grips an a couple edges bit one of the lips cracked. Be really careful, the outer lips can snap right off.  I found that I could use a larger clamp on one of the larger surfaces to bring edges close enough and was able to get clips on. There really needs to be a special tool to stretch the clips because there is not good edge to push against. 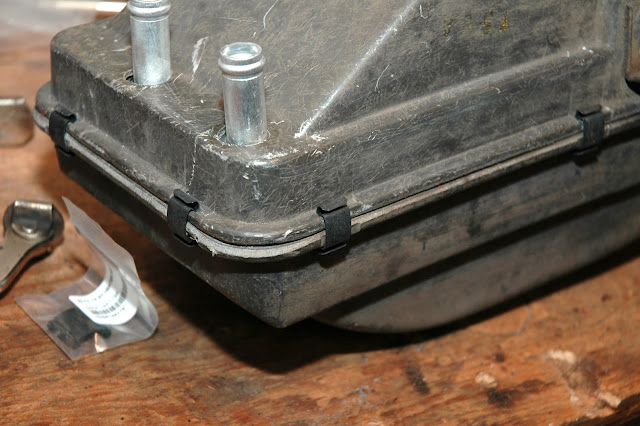